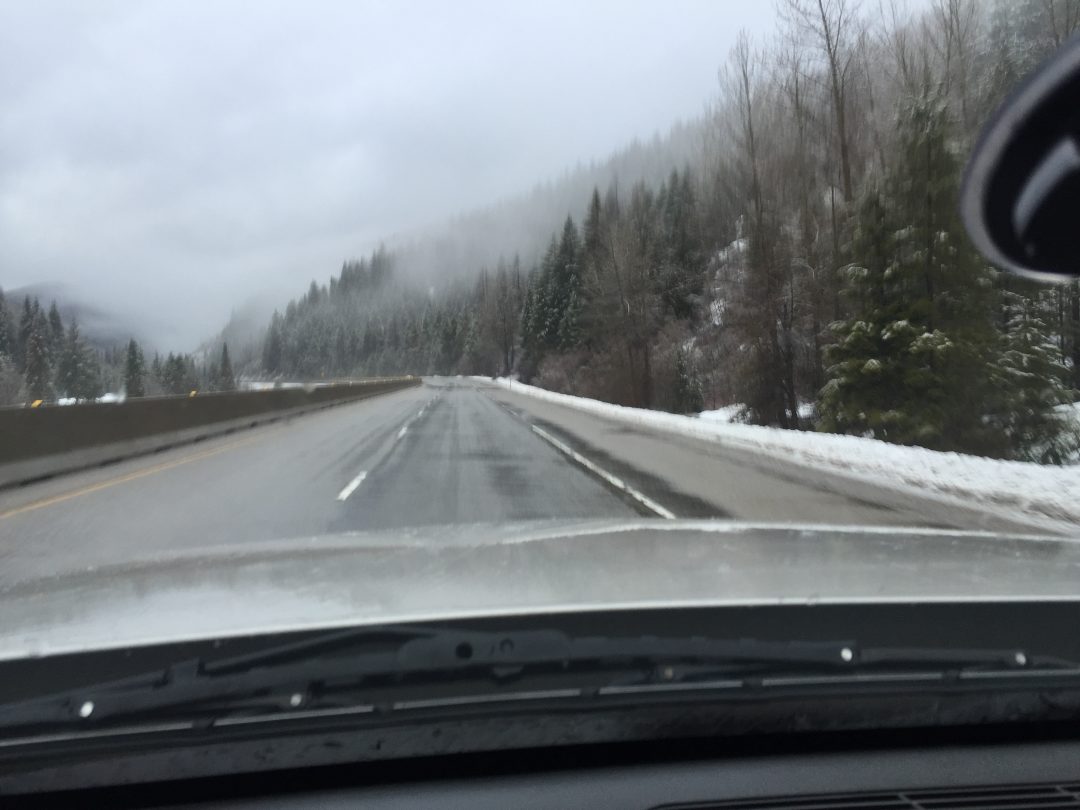 Driving into Coeur d’Alene felt like entering the Misty Mountains. I wasn’t completely surprised by the snow since it had started snowing in Utah. But the thick pine trees in combination with the snow felt much different here. More like – Narnia, somehow. 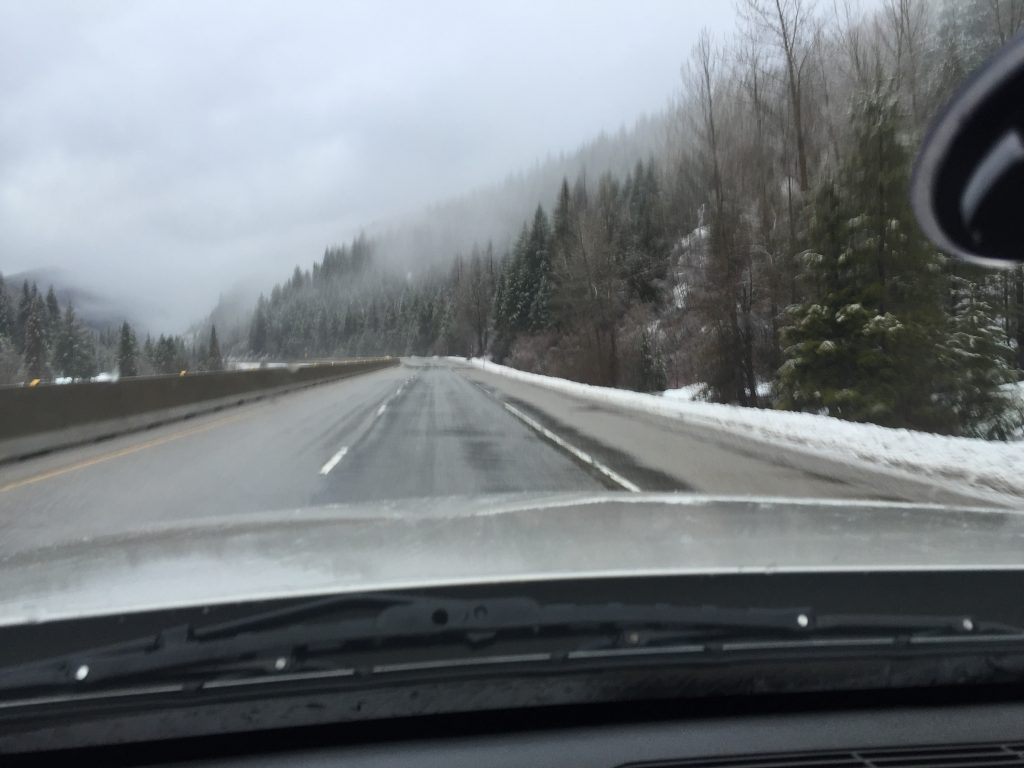 The last time I was here, it had been a brilliant July day. Blue, almost cloudless sky. I was 16 years old. My family was meeting up with extended family and I remember snatches of being on the lake. It was gorgeous and I vowed to come back.

When we arrived in Coeur d’Alene, we stopped for breakfast at Michael D’s. We were starving and needed time to strategize.

All of the locals were there so we knew we were in the right place. They have massive breakfasts and we almost had to be rolled out of there. We laughed when they put our plates on the table. (Sorry no pictures of the massive breakfast since we fell to eating, right away, and didn’t think about our phones again for a very long time.) But I did get a picture of my coffee cup! I was so pleased to finally be back in Coeur d’Alene that I had to take this picture. 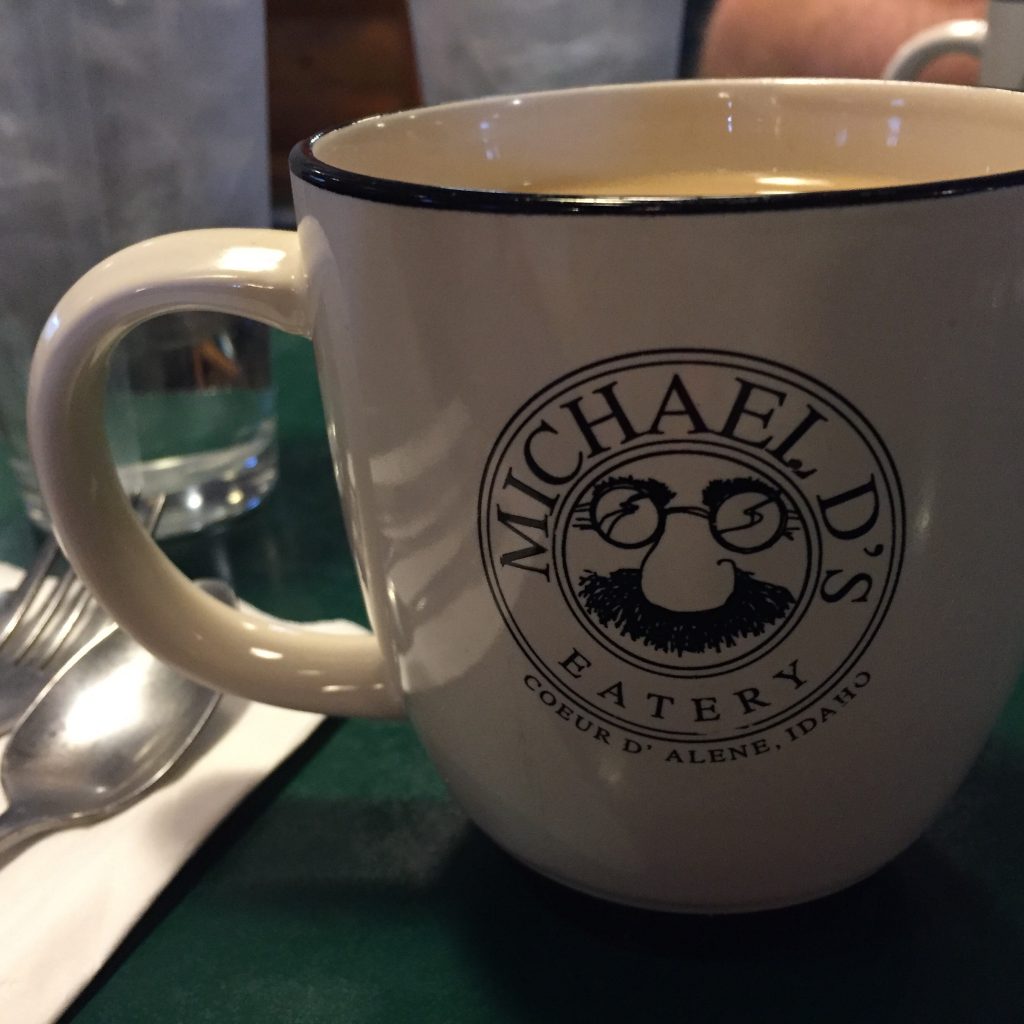 After our bellies were full, we turned our attention to lodging. Most places were not open until later in the season. Much later. Like June. We heard about a place in Spirit Lake that was a possibility. So we headed out that direction.

Spirit Lake felt like a magical hideaway that no one else knew about. The pine trees enclosed us and I very much expected to see a castle off in the distance. The snow had just begun to melt there and spring (I’m told) was beginning to poke it’s head out of the wet ground.

It certainly didn’t feel like spring in South Carolina.

We ended up finding a summer camp that had just been sold and was beginning renovations. The new owner agreed over the phone to let us stay there so we were alone in the camp. After our dog, Bear, freaked out at night and refused to “do his business” we asked about the dog that was loose in camp the night before.

It was a panther, they said. With everyone gone for the season, the camp being deserted and the camp being up against the woods, we were really out in nature. Deep breath. Well that might have been good to know.

Bear, for anyone not acquainted with him, weighs in at 9 pounds usually. 10 pounds when he is forced to wear his fat pants. I mean, a large or motivated toddler could carry him off. So yes, a panther might be a concern. And no, he wouldn’t save us or protect us. Bear is scared that the tissues might fall off the sofa and hit him in the head. And I buy the tissues in the soft package. 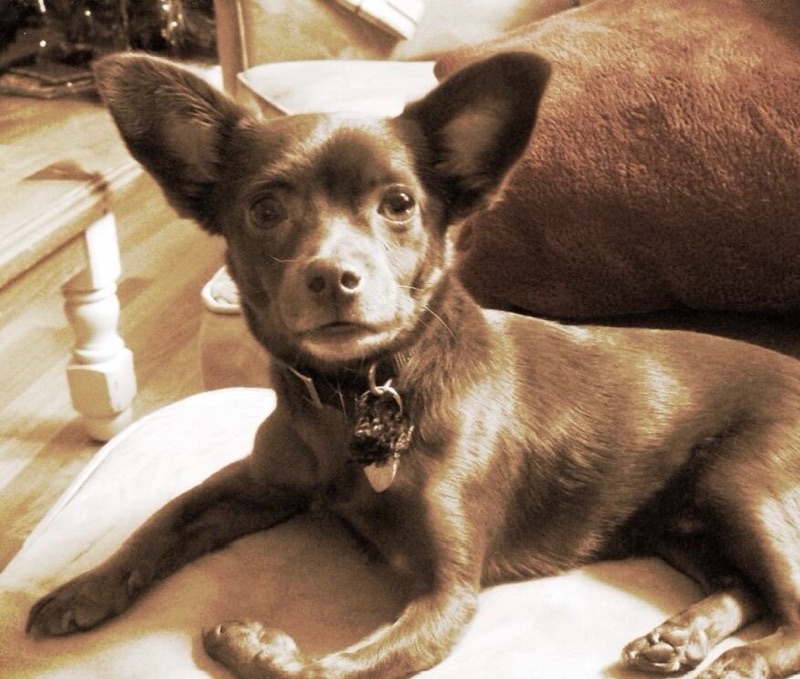 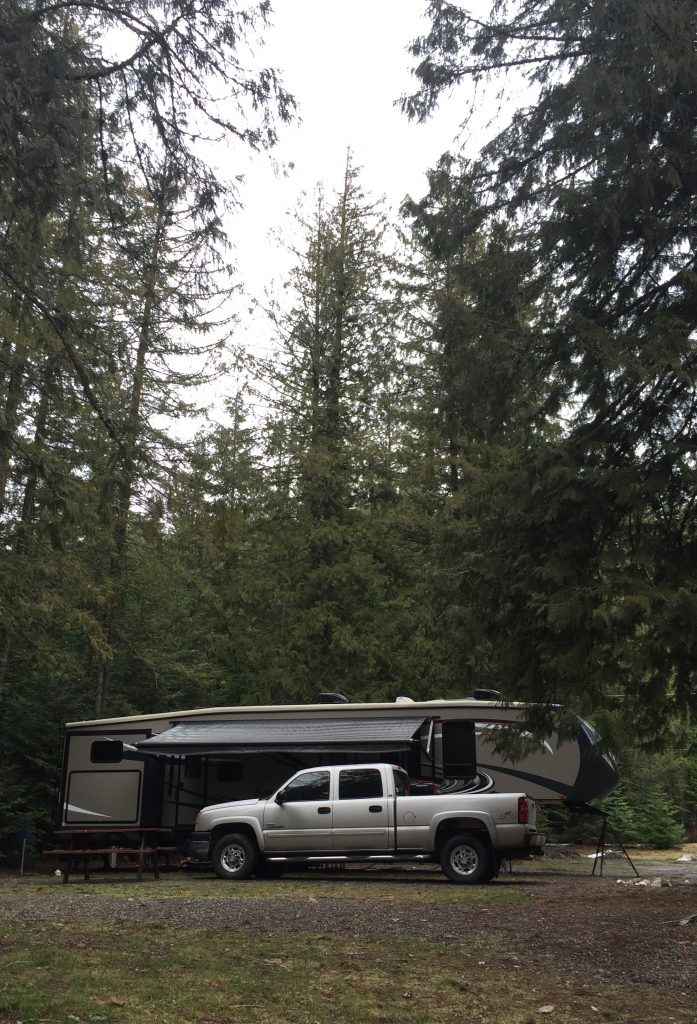 Alone with the pine trees and crystal clear lake. I was mesmerized by Spirit Lake  – looking through the small ripples all the way to the pea-size gravelly bottom. 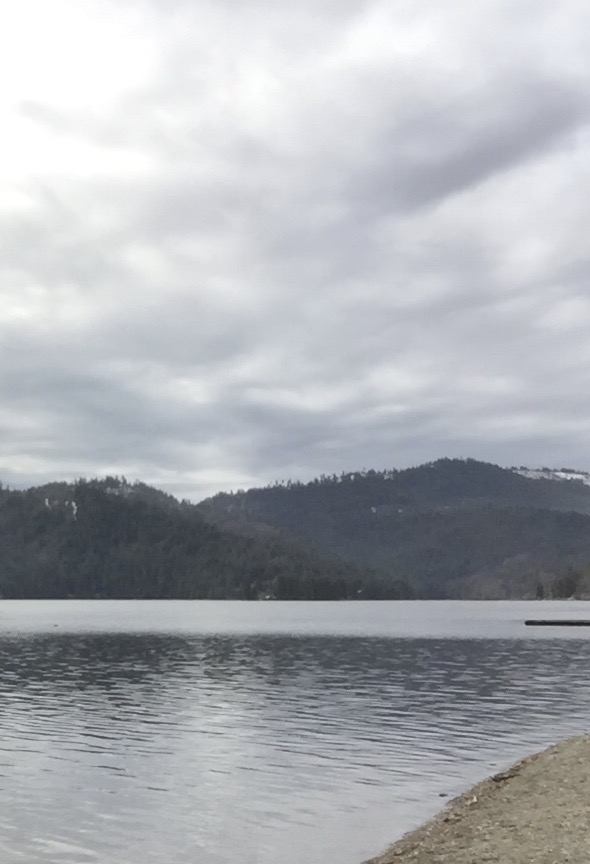 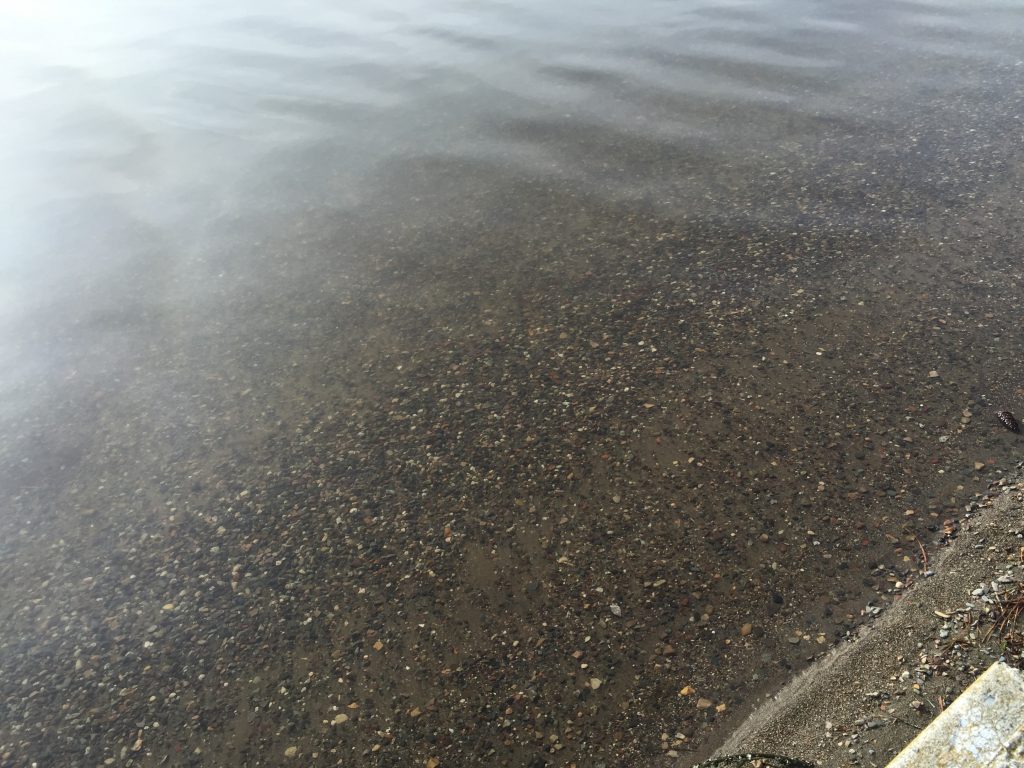 In the small town of Spirit Lake, there was a grocery store and a video place. The kind we had before Redbox came to town. I picked up boxed cake mix and tubs of frosting, candles, sprinkles and a few movies. It was Ethan’s birthday the next day. A most unusual birthday for us. Away from most of civilization. 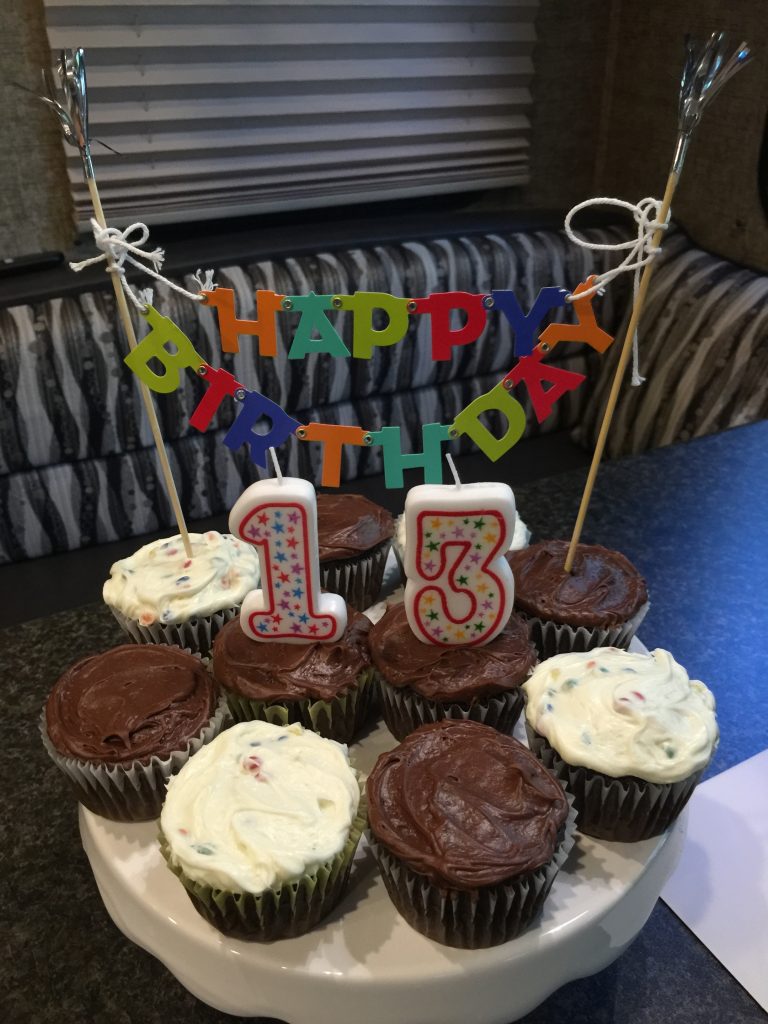 We decided to explore Sandpoint and ended up at the Panhandler Pies Restaurant & Bakery. Ethan loves burgers and they had burgers! They were so nice to us and we really enjoyed our meals. They gave Ethan a free birthday meal and piece of pie and even found a candle to put in it. We all tried different kinds of pie. I had the sour cream lemon (on recommendation), Tommy had pecan and Ethan had chocolate cream pie. They were all very good.

After lunch, we toured the Cedar Street Bridge Public Market and pressed a penny. We love collecting these as souvenirs. The cost is usually the penny that is pressed plus two quarters. My end game: I eventually want to hot glue a small loop of twine or ribbon to the backs of them and hang them on a small, live Christmas tree to show all the places we have traveled. An adventure tree.

But in the meantime, they make great souvenirs. Inexpensive. Not easily broken. Fit in a baggie! These are the two that we pressed on his 13th birthday. 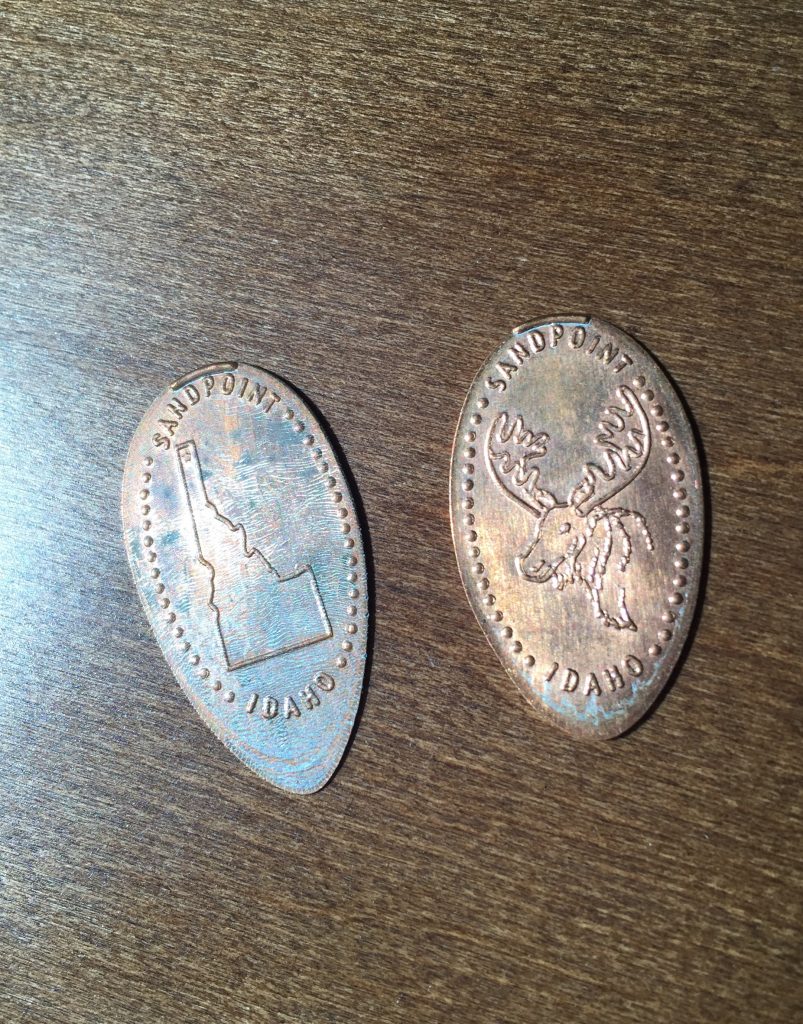 See the smokestack looking piece – the skinny piece – at the very top? That is where we were. Right near Canada!

The next day we looked at properties. What they all had in common? No neighbors.

And very little in the way of road names. Or roads, to be honest. 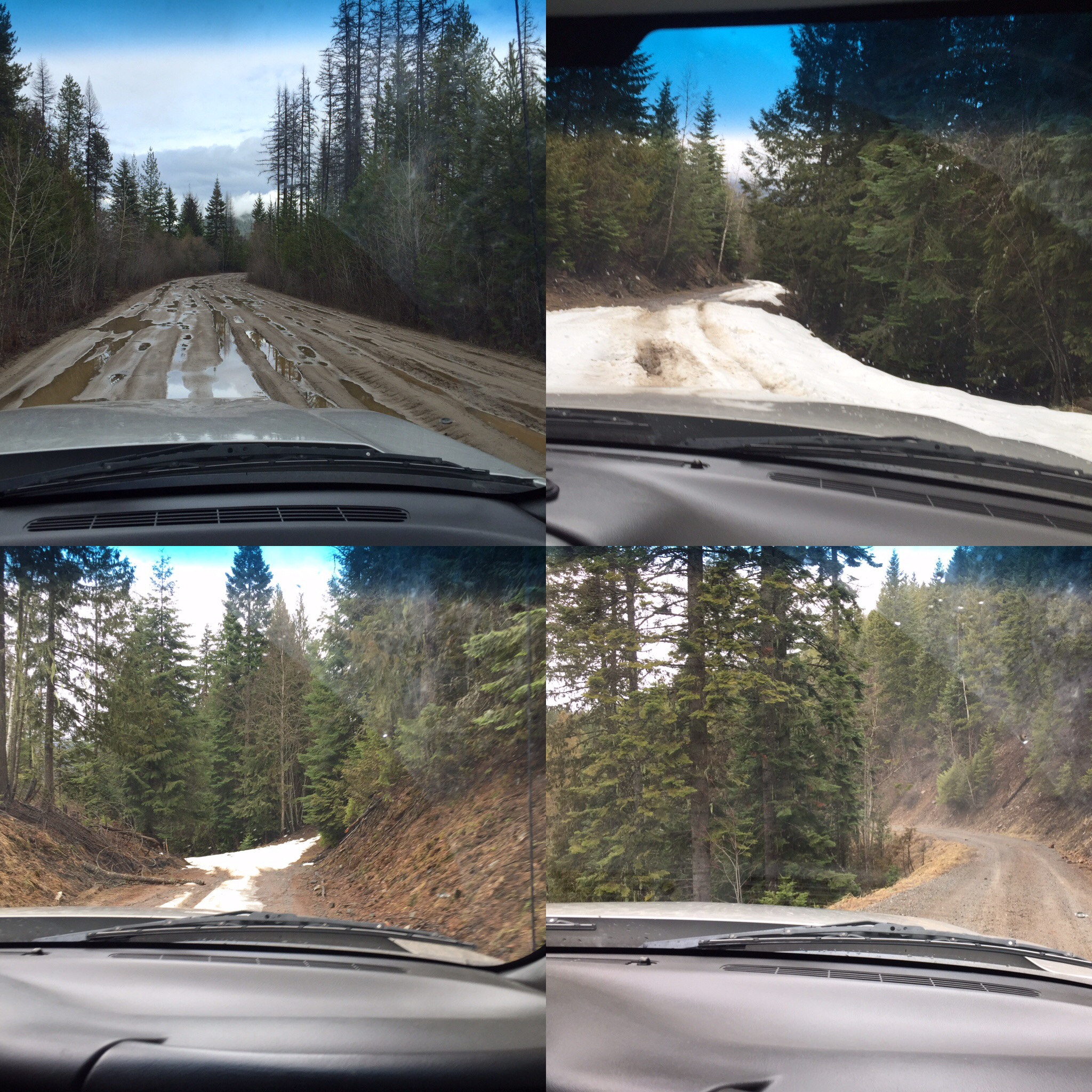 And my quick tour of Coeur d’Alene/Spirit Lake/Sandpoint would not be complete without showing you this shop.

I must have driven by this small shop eight times on the way in and out of Spirit Lake. We passed it going to our campsite. Then passed it again going to the store. This shop cried out to me to move here and make it a bakery. I even got out and peered in the windows. I can imagine outdoor seating. Families eating cupcakes with their little bitties. It was quite tempting. Doesn’t this look like it could become a charming bakery? 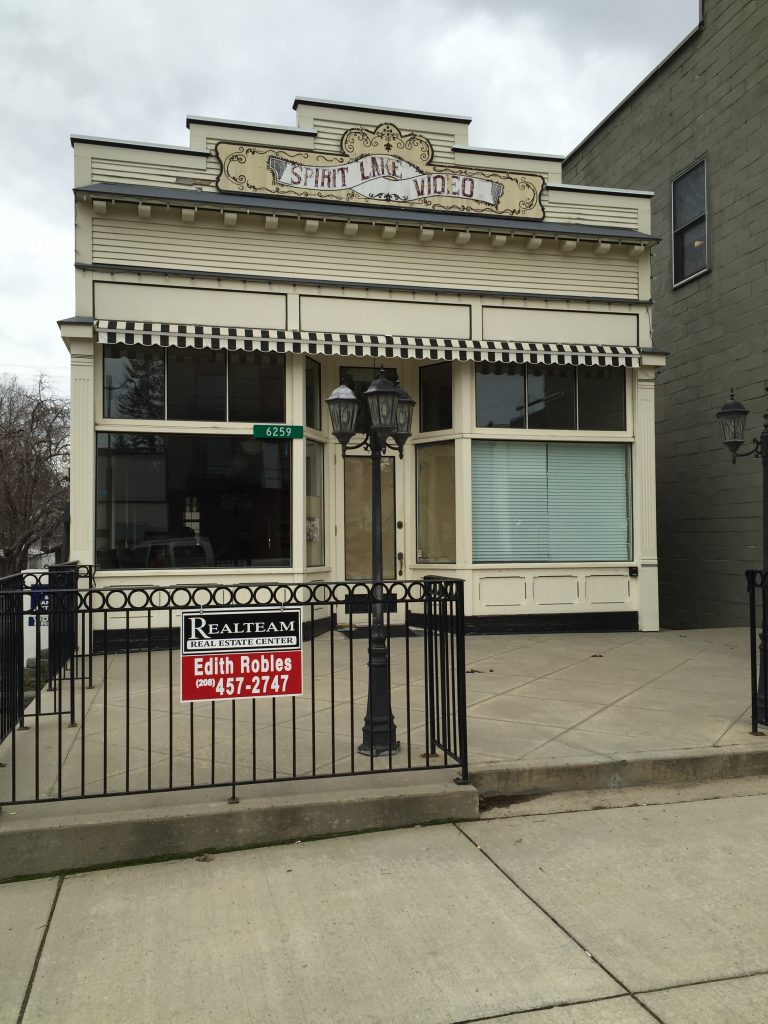 The weather was very overcast for the duration of our trip until right as we were pulling out of town, the sun poked out from behind the clouds. 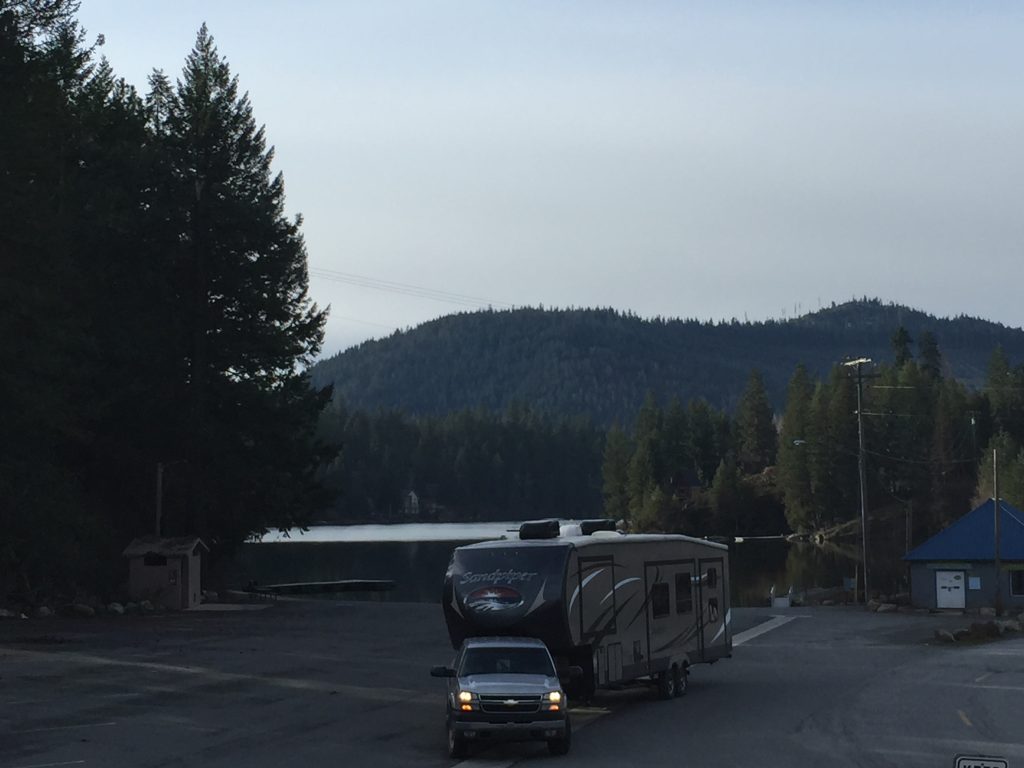 Remember, if you go visit in the summer your experience will be what I remember from my childhood. Warm, gorgeous, sunny and lots more people out on the lake. If you go in March, like we did, make sure you have somewhere to stay and be prepared for snow!

The camp where we stayed!

Michael D’s breakfast menu or find them on Facebook here