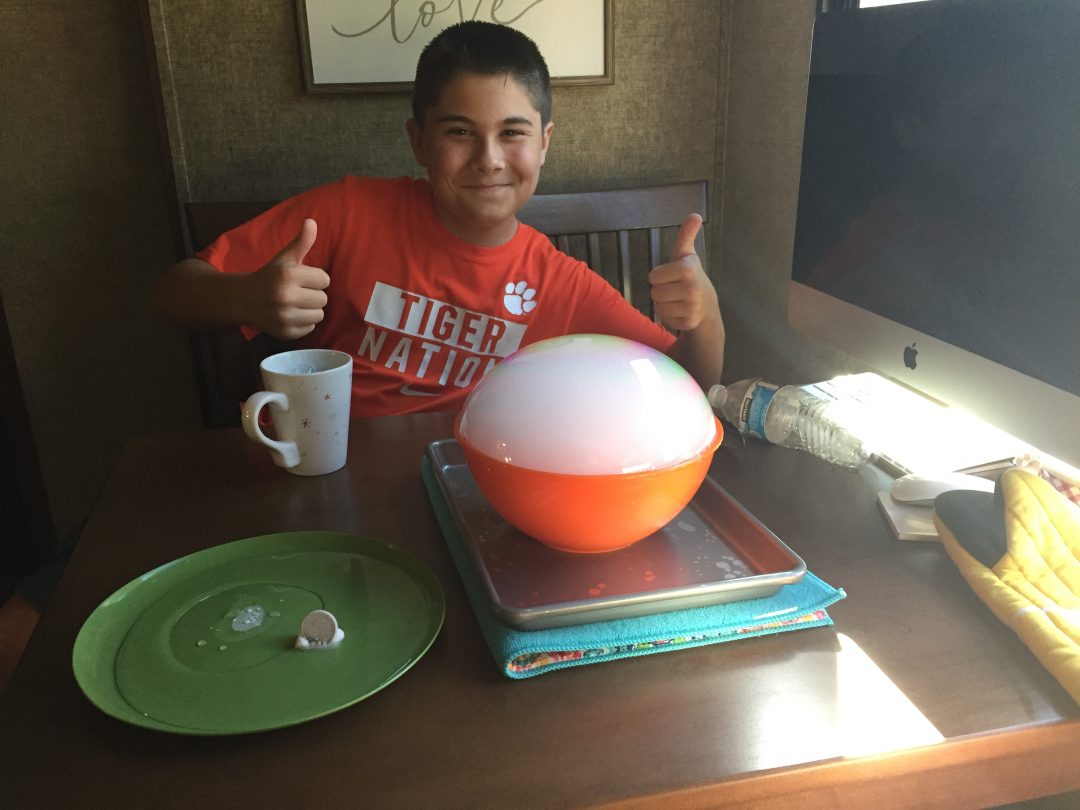 I hope when I wrote about Feast Day in this post approximately 45 days ago and promised that I would update you soon, that you didn’t take that to heart. I hope you have NOT been waiting with secret, mounting disappointment for the results of my trial feast. Because that would be sad.

And I really hope you haven’t been holding your breath waiting for it to appear, because that would be, well, dire.

And I have bunches of good excuses. I kept waiting for a rhythm to appear with our school days. Sick family. Hospital visits. Sick kiddo. Traveling. More traveling. Getting my child a haircut – every other day. Um, cooking. And watching The Great British Baking Show. Which was fantastic.

This week we had a meltdown in school. This is unusual for us. I think it was the enormous pressure of school. The pressure of being behind. Of just not being where I felt we should be. I wanted to bark out orders. Creative writing, now! Finish that book we were supposed to read aloud and walk the dog at the same time! Ever felt that kind of pressure? It just kills the mood. All of a sudden, school is this big, hairy mess we dread. I thought long and hard about it and then decided maybe we just needed to stop and feast.

Today, I let Ethan know after lunch we were celebrating. He was suspicious. He kept asking questions and I told him not to worry, he would love it! We ate at Chick-fil-A to create a celebratory feel and then started with dry ice!

[Before the school year began, I had asked what he would really, really like to do this year. Liquid nitrogen. Experiments that ended with something exploding. Aha. So I’m starting off easy with dry ice.] 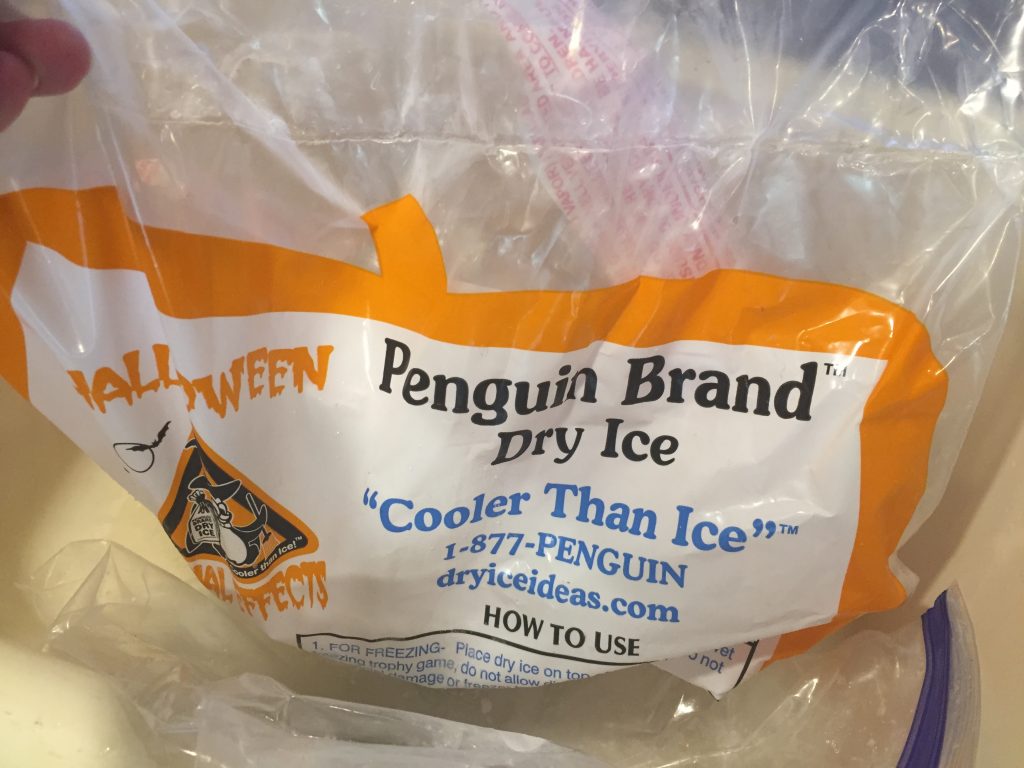 I purchased this heavy plastic bag of dry ice at my local Ingles. You pay by the pound and I was planning to get one or two pounds. The bags were pre-measured so I ended up with about nine pounds. This cost slightly less than $10. Other than lunch, that is all I spent today.

I had purchased this last night and put it in the freezer. Some of the ice had evaporated in my freezer but we still had a good chunk to work with. 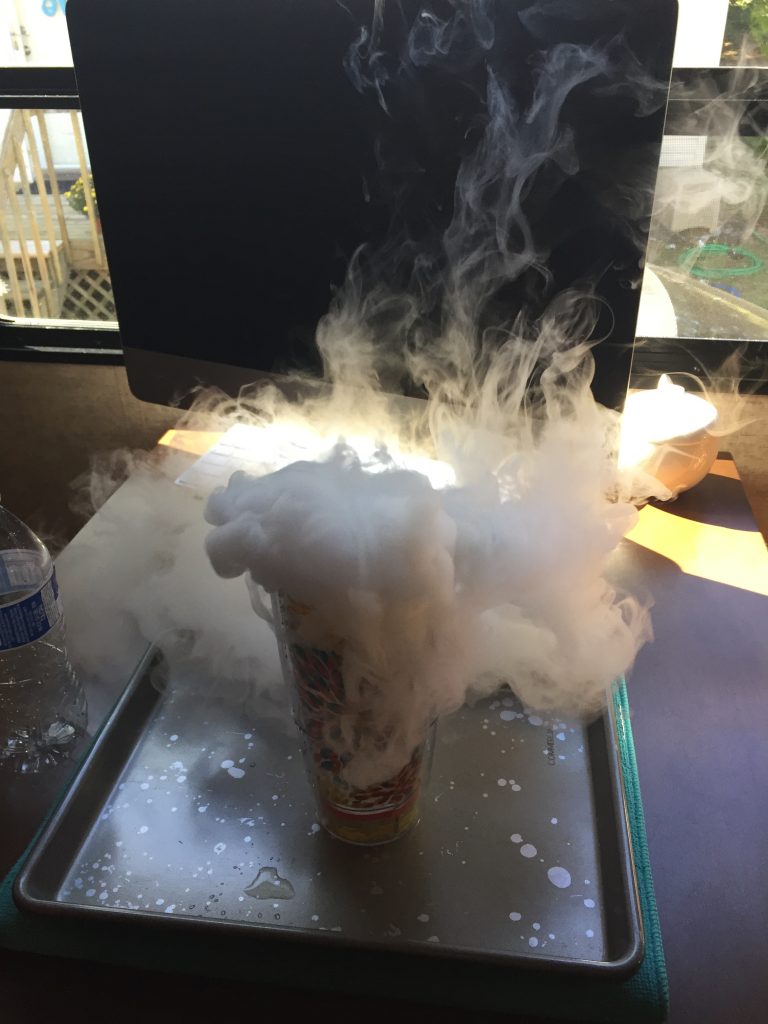 Activity 1 was putting a chunk of ice in a glass and on a plate. We poured warm water over the ice and it immediately turned to a gas (sublimation). It looked like quickly swirling fog. He loved that, so I knew we were on the right track. I had listed the experiments in order of excitement. 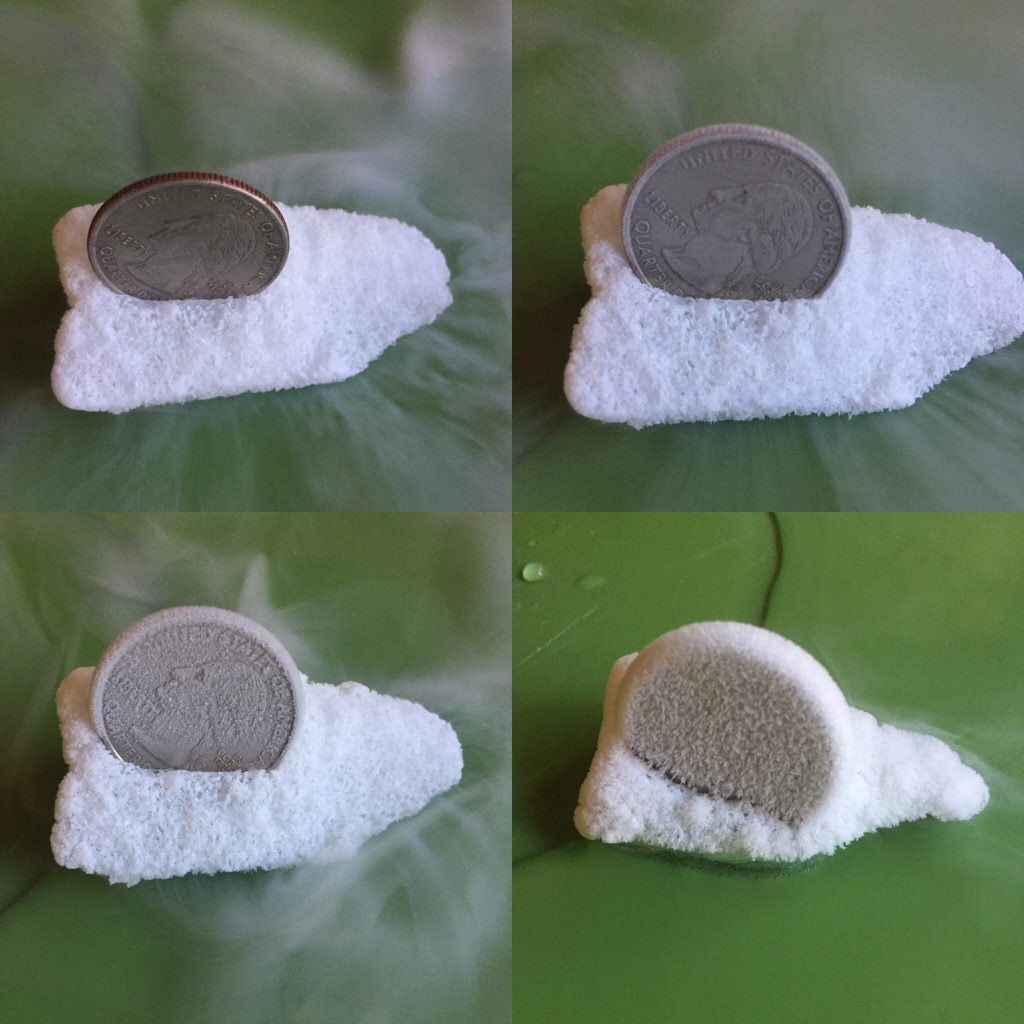 Activity 2 was warming a quarter in our hands and then inserting it into the ice. The ice rushes towards the heat and actually makes an interesting noise. Those are sound waves according to a science guide. It is like the ice wants to eat the warm metal to protect itself! No, that is not scientific, but it was amazing to watch. The quarter turned cold, then frosted over. This experiment also brought cheers. 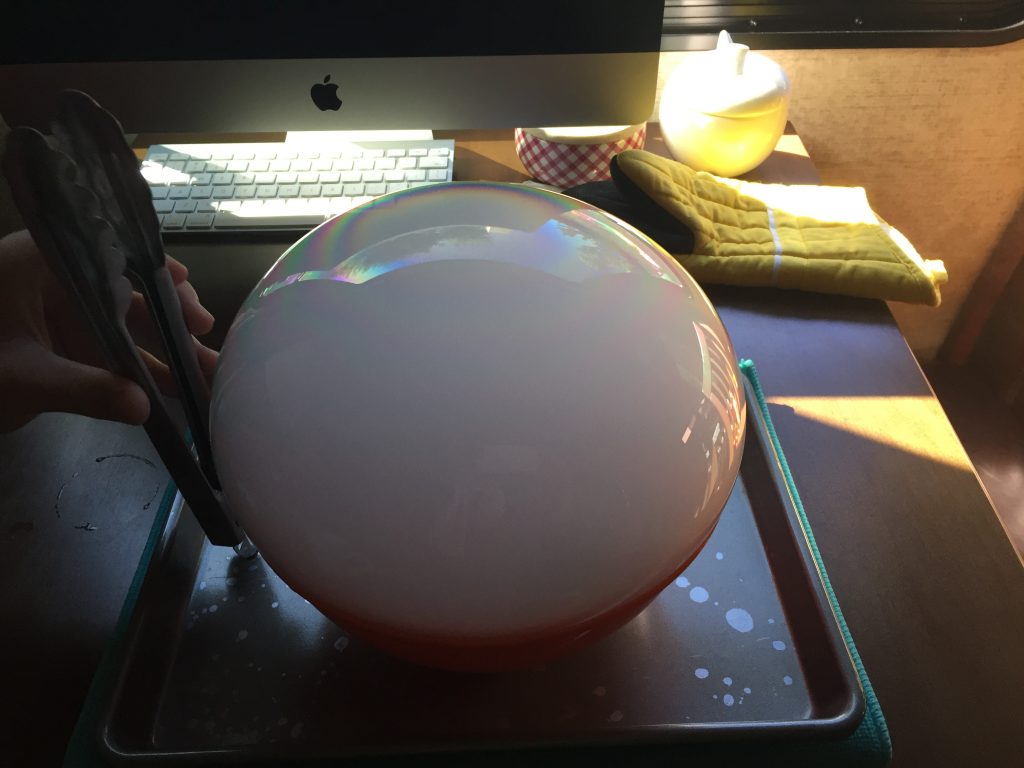 Activity 3 was trickier. We were trying to make a large white bubble that is called a crystal ball, due to the shape. We had to change bowls, rewatch the video and try several times but it did work! Patience and persistence! Also, a very satisfying experiment.

Activity 4 was the top of his wishlist. They are called dry ice bombs. You fill empty plastic bottles with ice and water and cap them. The pressure expands the bottle until they pop. If you do this one at home, more ice – less water. Keep your distance. Make sure the lid is REALLY on or the gas leaks out. And when it works, it is pretty terrifying. 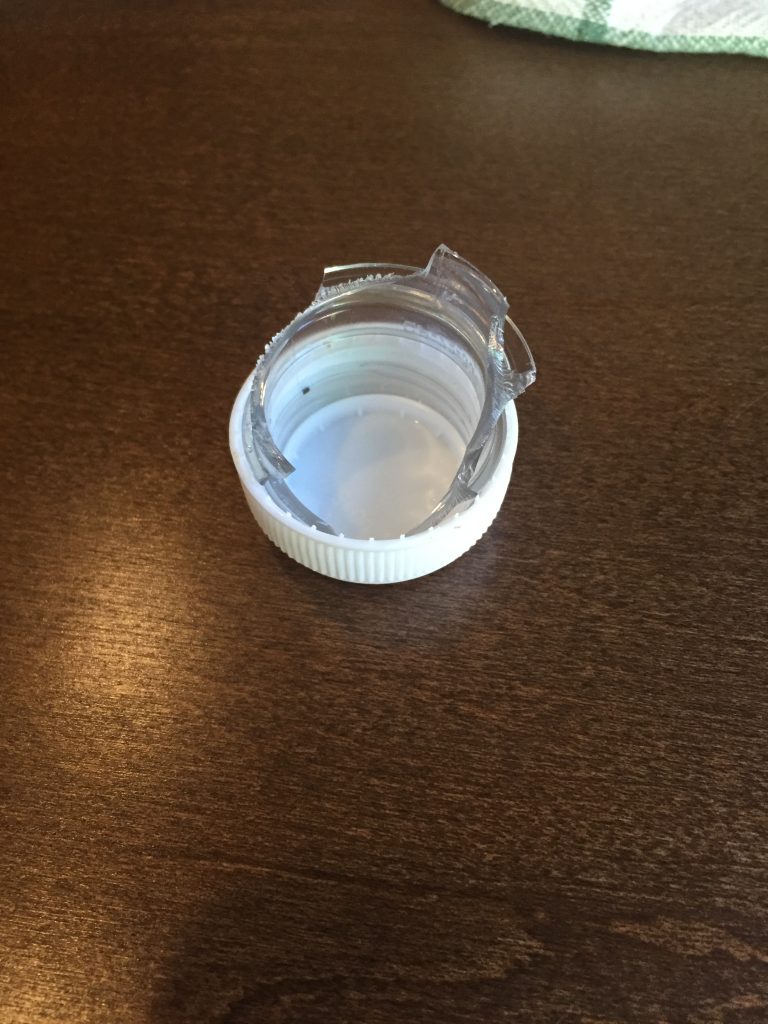 This one worked – it is the only remaining piece of the bottle.

Notice how the lid didn’t come off – it sheared off instead. Ethan wanted to make a bunch more once he had the formula worked out. Miss Party Pooper said no. The dogs were scared. The bottle had basically evaporated and it sounded like we were firing off a shotgun in the driveway. So for the sake of the neighborhood, we tried to just enjoy the one explosion we had. Already.

Then the last of the dry ice was reserved for making ice cream. This seemed like a good wrap-up experiment. But first, cleaning. 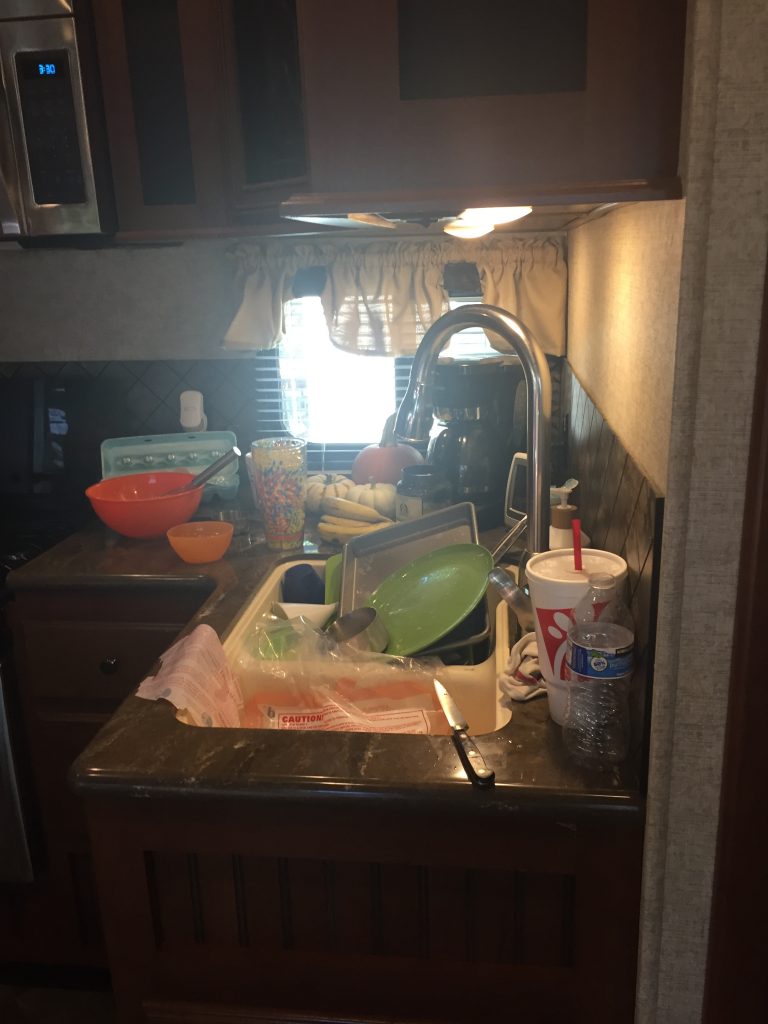 There was no counter left so we had to clean up before making the ice cream base. 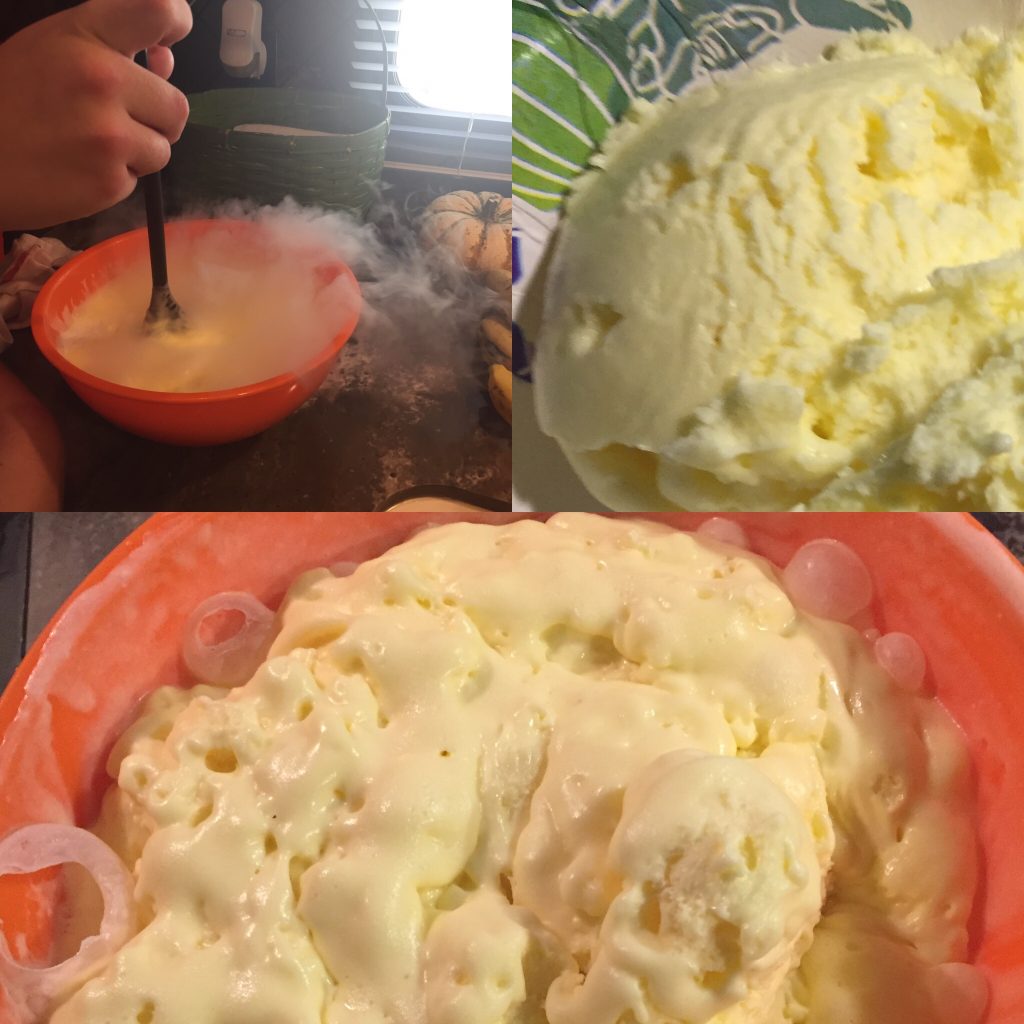 While that was in the fridge, I pulled out the real focal point of this special day. A large box from Amazon that we have been toting around for two months. 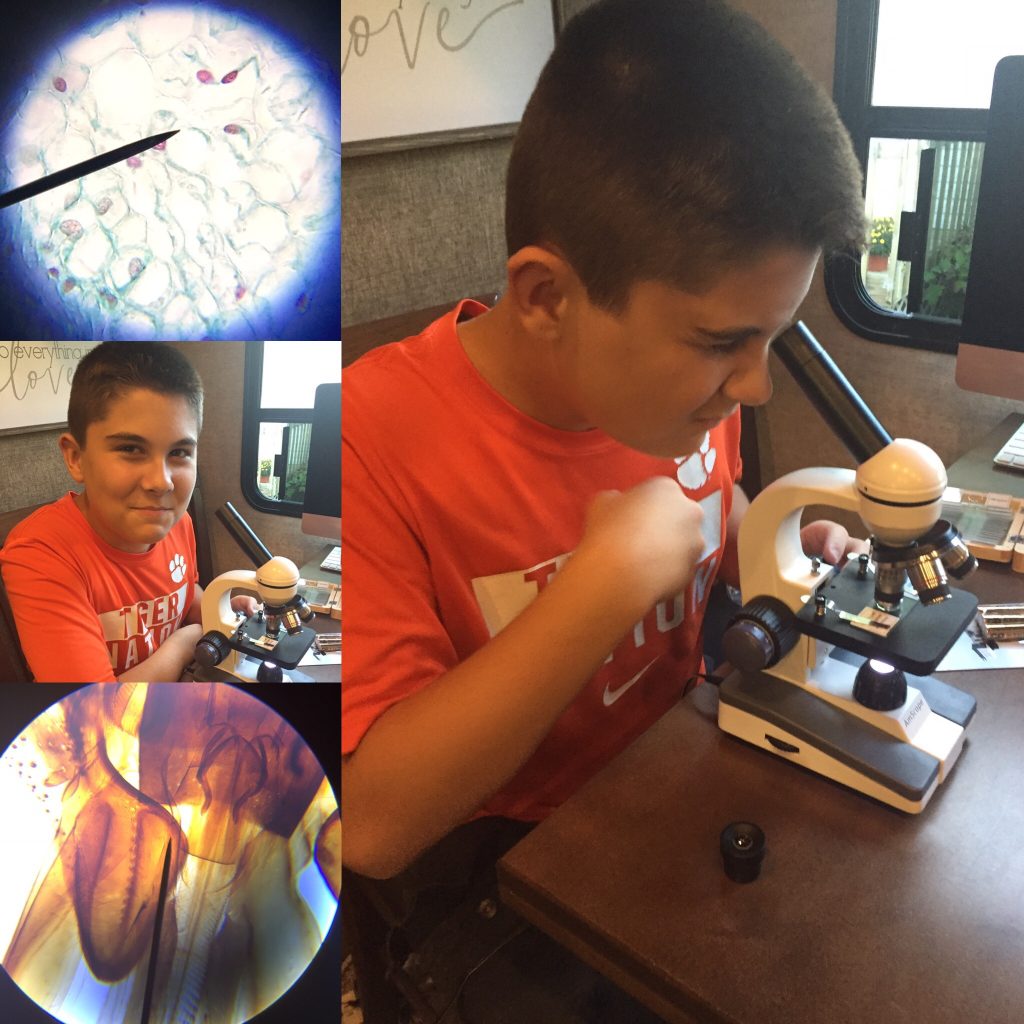 Ethan was excited to see it was a microscope and slide set! And the excitement grew as he actually looked at the slides.

While we were waiting for the ice crystals to completely melt, we watched a movie adaptation of a book we had just finished. And we ate the ice cream for intermission even though it was before dinner.

All during the last part of the day, Ethan must have said five times that I had won the mother-of-the-year award hands-down. That this was the best day ever. The microscope was amazing.

It checked off every box for him. And he was inspired by science!

My takeaway: it was worth every penny and every planning second. I need to keep doing these. When I am feeling smothered by pressure, it is likely that I also need a day of inspiration and celebration. He asked when we could do this again and then gathered everything up to share ice cream and his microscope with family. It was a full, rich day.